The 2014 Eureka Springs Blues Weekend, presented by The 1905 Basin Park Hotel, will be held June 12 through 15 in historic Eureka Springs, Arkansas. Blues Weekend features local, regional, national and international blues acts, and is held in venues all around Eureka Springs. Headliner shows are held in the historic City Auditorium, late shows in the Barefoot Ballroom atop the 1905 Basin Park Hotel, blues bands are playing in clubs all around town, and we have free music in Basin Spring Park on Friday and Saturday afternoons. Get Tickets Now!         See Special Vacation Packages! 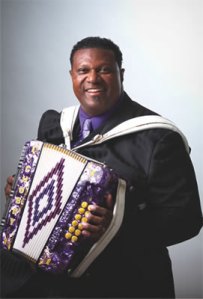 Chubby Carrier is undeniably “The World’s Premier Zydeco Showman.” Born in Churchpoint, Louisiana, Chubby is the third generation of zydeco artists with such famous relatives as Roy Carrier (father), Warren Carrier (grandfather), and cousins Bebe and Calvin Carrier who are presently considered legends in zydeco history. Chubby began his musical career at the age of 12 by playing drums with his father’s band. He began playing the accordion at the age of 15. By age 17, Chubby had begun to play with Terrance Siemien and toured the world for 2 1/2 years, before forming his own band in 1989. Chubby Carrier and the Bayou Swamp Band have recorded ten CDs over the past 22 years of Chubby’s professional career. His band has traveled all over the world, performing to audiences in all parts of the United States, Canada, North Africa and Europe. Chubby and the band travel 150-175 days a year, taking his act to big festivals such as the New Orleans Jazz Fest, the Chicago Blues Fest, Memphis in May, and several festivals in Europe. Carolyn Wonderland is a musical force equipped with the soulful vocals of Janis and the guitar slinging skills of Stevie Ray. She reaches into the depths of the Texas blues tradition with the wit of a poet. She hits the stage with unmatched presence. Carolyn grew up the child of a singer in a band and began playing her mother’s vintage Martin guitar when other girls were dressing dolls. Wonderland went 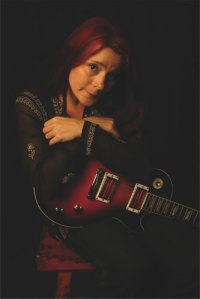 from being the teenage toast of her hometown Houston to sleeping in her van in Austin amid heaps of critical acclaim for fine recordings like Alcohol & Salvation, Bloodless Revolution, and most recently, Miss Understood. Along with the guitar and the multitude of other instruments she learned to play — trumpet, accordion, piano, mandolin, lap steel — Wonderland’s ability to whistle remains most unusual! Walter “Wolfman” Washington has been an icon on the New Orleans music scene for decades. His searing guitar work and soulful vocals have defined the Crescent City’s unique musical hybrid of R&B, funk and the blues since he formed his first band in the 1970s. Washington began his career during the fertile heyday of the 1950s Rhythm and Blues period that spawned dozens of Number 1 songs and made New Orleans the recording destination of choice for hit makers like Ray Charles and Little Richard. Born in 1943, Washington was on the road by his late teens spending over two years backing the great vocalist Lee Dorsey who was touring in support of his smash hits, “Ride Your Pony” and “Working in a Coalmine.” He played with New Orleans legends Irma Thomas and David Lastie, then toured for years with the late, great Johnny Adams. Washington’s guitar playing has been without compare since the early days of his career. As a rhythm player he provides just the right tension to support his band members when they take their solos. But it is during his moments in the spotlight that Washington really shines. When he plays lead guitar, jaws often drop in the audience as he spins out highly nuanced solos that build in intensity or spiral around a central theme. Of course, that’s before he even begins to play with his teeth! Also appearing around town are The 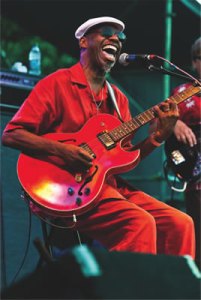 Weekend Passes and tickets are on sale at EurekaSpringsBlues.com. and ReserveEureka.com

Hotel and ticket packages are also available at the 1905 Basin Park Hotel and Grand Central Hotel.

All acts and times are subject to change.