A performance unlike any other magic show you have ever seen…

this husband and wife team, who bill themselves as the Illusionist and the Medium, offer the viewer a glimpse back into what one might imagine an evening with a magician and a spiritualist, appearing in a parlor during Victorian or Edwardian times, would resemble, coupled with lavish costuming and dead-on presentation.

Well-crafted background stories for segments compel audience members to set aside disbelief, even for the most hardened skeptics, as Sean-Paul and Juliane weave rich threads of jaw-dropping illusions, skillfully performed by a charismatic Sean-Paul, with truly surprising feats of mentalism presented by the beautiful Juliane. He interacts very closely with the audience, who are seated in an old church, surrounded by stained glass with a high ceiling, and the front row nearly within touching distance, just off the raised stage. His stock in trade is good eye contact, a remarkable memory for names, and a rapier-sharp wit, both onstage or as he roams through the seating area, and interacts with individual audience members in the theater.

A lovely and graceful assistant, Juliane shows her true worth when she begins the mentalism segment. Her performance is nothing short of amazing, and while the concept of mentalism is not a new one, her presentation of that skill in this show is remarkable. The evening is filled with moments of both awestruck silence and thunderous applause, with plenty of laughter sprinkled throughout. No hillbilly comedy is offered here, but instead smart humor which often emerges directly from interaction with an audience member, but which is never delivered in an unkind or cutting manner. Driven in part by audience participation, the show is different each time it’s performed. 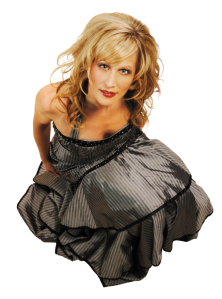 The ticket price represents a very good value for more than two hours of world-class entertainment during the regular show, with a tiered system based on premium seating in the first two rows, with general admission behind. A second show, Exclusive Evenings, is presented in a different way, with Sean-Paul and Juliane in contemporary clothing, but still offering a unique experience. Limited to an audience of sixteen, Sean-Paul performs sleight of hand illusions and card tricks directly before audience members, and Juliane offers yet more unbelievable demonstrations of mentalism. The intimate setting with the close proximity of both performers combines for a one-of-a-kind evening, different from the larger theater setting, but not to be missed. 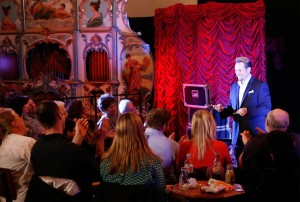 This entry was posted on May 9, 2014 by estcblog in Attractions, Ghosts, History, Things to Do and tagged illusionist, intrigue, Intrigue Theater, Magic, medium, Sean-Paul, tickets.